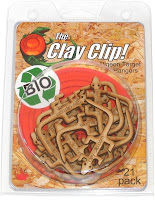 The Clay Clip is a product I designed, manufactured, and launched under my company AE Innovations.   It was - and continues to be - a big learning experience.  I normally do electronics work!

I made the Clay Clip because I, like millions of other people, enjoy target shooting.  I also like using clay pigeons as targets, but there was no easy way to hold or hang them up to use as targets.  So I made something to do the job.

The Clay Clip will be the subject of a followup on the details around what it was like to design, make, and sell it.  Many makers are turning pro in one way or another and the more we can share about the process, the more we all win.

In this post, I will explain what the Clay Clip itself is and how I developed it.  A followup will delve into the process of what was involved in turning it into an actual product.

The device has a simple purpose: it makes hanging clay pigeons (aka 'sporting clays') up as targets easy.  It is also small and inexpensive.

In case you don't know, the colored discs are clay pigeons.  Their intended purpose is to be flung into the air (where they fly a little like frisbees) and shot with a shotgun.  The clays are hard and brittle, so when they are hit they break up.  Shooting clay pigeons is done in shooting sports like Skeet and Trap.  It is an Olympic Sport. 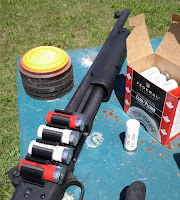 Pictured left are some clays with one of my shotguns (which itself sports a 3D printed shotshell holder I designed in Google Sketchup and printed on my Makerbot Cupcake 3D printer.)

Sporting clays are also useful as ordinary, non-airborne targets.  If you shoot them with a pistol or rifle (including airguns) they make excellent reactive targets - meaning they "do something" (such as break or chip apart) when you hit them.  They are often useful for much more than one hit, too.  You can chip away at one for a surprisingly long time sometimes.

This is fun and useful and especially helpful for beginners; it's helpful to see something happen when you hit a target.


So what's the problem?

Due to the size, shape, and balance of sporting clays, they are not easily used as normal targets.  The usual ways of setting a target up don't work.  They don't stand up by themselves.  Their center of gravity is odd when they are on their side.  Their round edge has a bevel which keeps slipping when you try to lean them on something.  They are too heavy to be held up with tape, and stapling them to anything is certainly out of the question!  Other than laying them on the dirt of a berm, there isn't much you can really do with them.

But with the help of this small (and cute) thing:

I can now easily and cheaply do this: 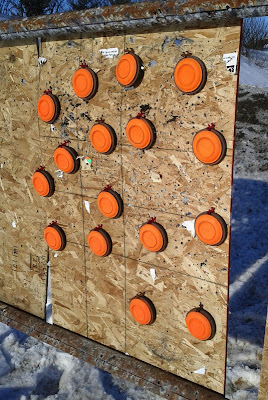 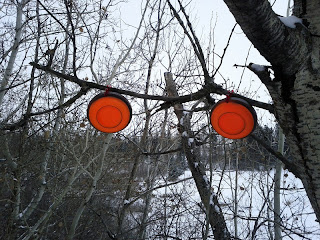 You can follow this link for details of how it actually works as well as a frequently asked questions: How to Use the Clay Clip.

I first got the basic idea in late 2011.  The first two versions were designed in Sketchup and 3D printed on my Makerbot Cupcake.  They looked like this: 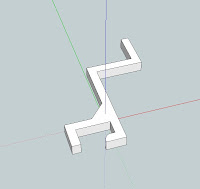 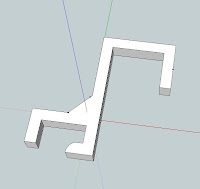 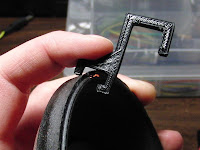 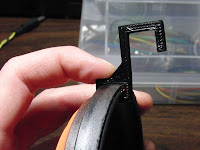 One was for anchoring into holes, and the other was for hanging on ledges (such as the edges of holes too large for the other style) or sticks, string, and other things of that nature.

I discovered that both types were useful.  Also, I realized that I needn't have worried about finding spots to use the clips.  Holes, ledges, etc are more than plentiful at the average range.

In January 2012 I posted the designs on Thingiverse where - to my surprise - they actually got some attention from people.  I was surprised because anything related to firearms is basically a niche item when it comes to the online world in general. It's simply not welcome in many places online. 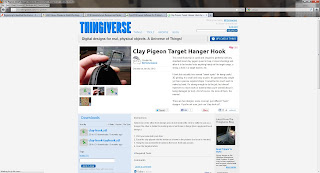 However, Thingiverse outright forbids "weapons-related" things.  I wound up taking the models off Thingiverse.  (Thingiverse also removed another vaguely firearm-related thing I designed - the removal was accompanied by a legal notice.)  Clearly, items don't need to actually be weapons for Thingiverse to object.  I don't use Thingiverse for such things any more.

You are welcome to download and play with the original 3D designs!  They are no longer on Thingiverse, but I have them for download from here and here which you are welcome to - I have made them public domain.

The clips hit several "sweet spots" for 3D printing.  They were small and easy to print.  They were geometrically simple, but required precision and had a shape that would be far too much trouble to make by hand.  The unit is plenty strong enough to do the job, but doesn't require so much time or material that you're worried about it being lost or damaged.  (Which is good, because like anything that holds a target up, it won't last forever and needs to be considered semi-disposable.)

I was able to iterate the design many times thanks to easy 3D printing.  I finally settled on a design that implemented BOTH styles of hanger in the same piece.  Use one side to hook the clay one way, and use the other side to hang a clay the other way.

To top it all off, I gave it the lizard shape to make it cute.

The design was "done" in the sense that I was happy with what I had and was confident I couldn't make it significantly better.

I decided that 3D printing was unsuitable for more than prototypes. I settled on laser-cutting to make the final versions.  By late 2012 I had promotional branded and demonstration units about as done as they were going to get.  (The unit has space for branding - right now it says "clay-clip.com" on the side but I have made others branded with company names as promotional items - it beats giving away pens or keychains at an outdoor or shooting trade show!)

I showed them to many people at SHOT 2013 (Shooting, Hunting, and Outdoors Trade show) in Las Vegas.  I came back and dove into launching a new product, from scratch!


Where it is Now

Right now I sell the Clay Clip online direct to the USA and Canada as well as supply retail outlets.  If your favorite retailer doesn't carry the Clay Clip, send them this link and I'll get them hooked up!


So, I have a finished product being sold online and in stores, but a LOT happened between deciding to make a new product out of a finished design, and actually getting there.  I'll talk about that in more detail in a followup post.

In a future post I will deal with the "going pro" experience and details: manufacturing, packaging and printing, the difficult decision of whether to pursue a patent, and of course - actually selling a finished product and getting it on shelves.