Almost 30 years ago I watched Aliens on a borrowed dub of a VHS cassette.  I was just a kid.

It was influential to say the least.  I was so rattled I don't think I slept for a week afterwards!  An influence it had on me was that the main character Ellen Ripley was a total hero.  Ripley actively and consistently chooses action over inaction.  But most of all, she was brave.  Not because she wasn't scared - but because she took action despite being scared.

This project doesn't have anything to do with Ripley as a role model, but it has everything to do with the lasting influence of a nearly 30 year old sci-fi movie.  Also it means that I'm apparently still just a kid - I just have access to more expensive toys for imagination time.

Let's go through the things and equipment that were needed to indulge me:

A laser cutter is an amazing machine that costs thousands of dollars at least.  It is capable of sub-sub-sub-millimeter accuracy.  Here I am using it to cut a Facehugger out of cardboard. 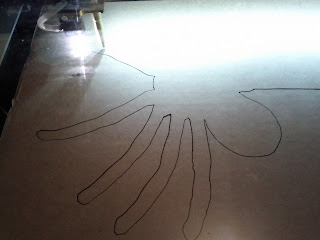 I also cut out a Facehugger paint stencil to give a sense of depth. 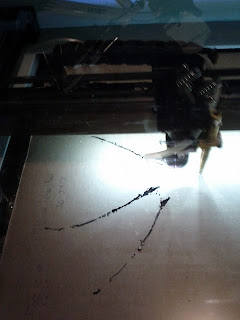 I started with doing a bit of processing of a graphic I had found somewhere on the internet in Inkscape.  Here is the DXF file I exported from Inkscape - it's a vector graphic you'll have to finish up yourself.  It's incomplete but a decent starting point if you know what you're doing.

I went from that file to using some proprietary software for the laser cutter to complete the design.  Here is a PLT export of the finished design - you should be able to modify it as needed (assuming you can use PLT files - it's the only format I can export properly.  Sorry.)

The paint I used is optimized for plastics - but it's black and within reach so it'll have to do! 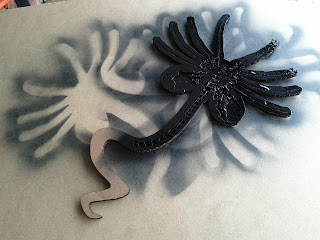 The engineering and chemistry work that went into making such a specialized paint is frankly being wasted on me here.  I also can't help but notice that I'm using a car - another modern miracle - as a drying rack. 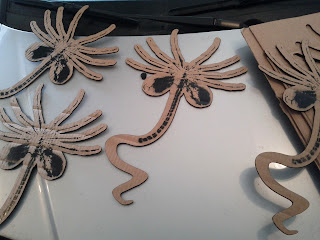 Clay pigeons (of which I happen to have a lot on hand because I am developing a new kind of target hanger) have been refined since the early 1900s.  They are used by Olympians in world-class contests of skill that can define people's lives.

I stuck them to the bottom of cardboard cutouts of imaginary monsters. 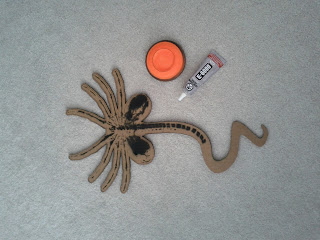 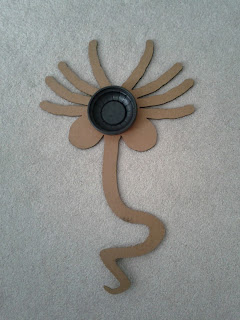 Color large-format photo printing is possible thanks to an incredibly complex combination of technologies and precision.  It's one of those technologies that, if you knew how it worked, you'd be amazed it even works at all.

I had a shop use that level of technology to print out a couple Aliens eggs (which I found images of on the internet - itself another miracle).  It cost me under 20$.

I glued them to cardboard and hacked them out with a box cutter. 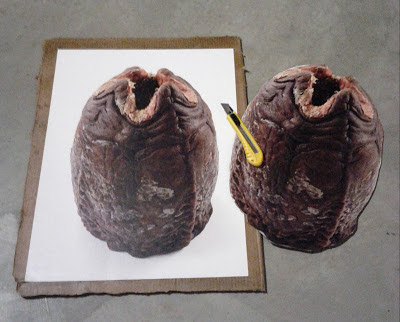 I used a US Popper target from MGM Targets along with a pigeon flipper attachment to make this all work.  It was expensive, but I sold one of my guns (a Grand Power K100) to buy it.  I always wanted one anyway.

The target is made from AR500 steel.  It can withstand forces probably only a physicist or engineer really comprehends.  Manufacturing it required precision and applied force with the kind of precision and power that most people will never encounter in their lives.

I'm going to use it as a glorified frame and stick stuff to it with duct tape! 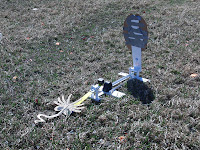 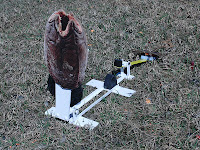 So what did I use a staggering amount of modern technology for?  Apparently it was to prove I am still just a kid who watched Aliens back in the '80s by making a facehugger that jumps out an Aliens egg when it is shot by a shotgun.