My Inter-dimensional Camera Takes Photos of an Alternate Reality 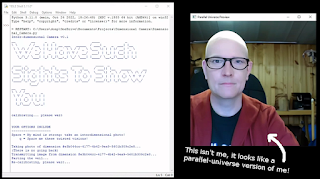 I had an idea recently that I quickly prototyped: The Interdimensional Camera.

The idea is that the camera takes images not of the reality directly in front of the lens, but from a neighboring dimension (or parallel universe, if you prefer.)

It uses the Dall-E API from OpenAI to turn what the camera sees into an alternate-reality version that is kind of close, but also entirely different.

The original image -- what the camera ACTUALLY sees -- is actually never shown to the user, which feeds the narrative that the camera is somehow seeing into an alternate reality.

What keeps this from just being a crappy snapchat filter knock-off is the fact that it works on ANYTHING. Not just people, not just faces, but ANYTHING including objects, scenery, animals, plants, etc.

Check out the code and details if you're interested.