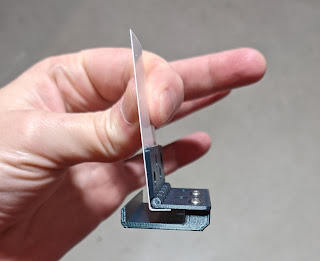 I'm in the process of turning part of a shelf into a 3D printer enclosure, and I ran into an issue that having a 3D printer really helped me solve. It illustrates how making custom objects for a specific purpose is a really useful purpose.

The problem with making multiple little rails at different heights is this: they get in the way of the panel.  If the panel mounts low, then it's laying ON every other little rail in between. That might be a bit hard to picture, but the end result was that I needed a rail that could push itself out of the way when it wasn't needed. To solve this problem, I made the piece shown in the picture here.

The part is a combination of a print-in-place hinge that I customized (the top part in the photo), which was screwed to the part I designed (the bottom piece).  The white card in the photo represents the shape of the metal shelf bar (which has an inconvenient 90 degree bend in it.)

The way it works is this: when the front panel is sat down into the little shelf, it is held in place and supports the panel. If I press on the hinge -- like by laying a panel on it because I'm mounting at a lower height -- the hinge tilts completely out of the way. When I take the panel away, it flips back into place because of gravity. The video below demonstrates how it works.

This part would have been impractical to make in any other way, but a 3D printer turned it into a single evening's project, and that is part of its real appeal and power.