An FPV RC Setup, or The Guide I Wished I Had 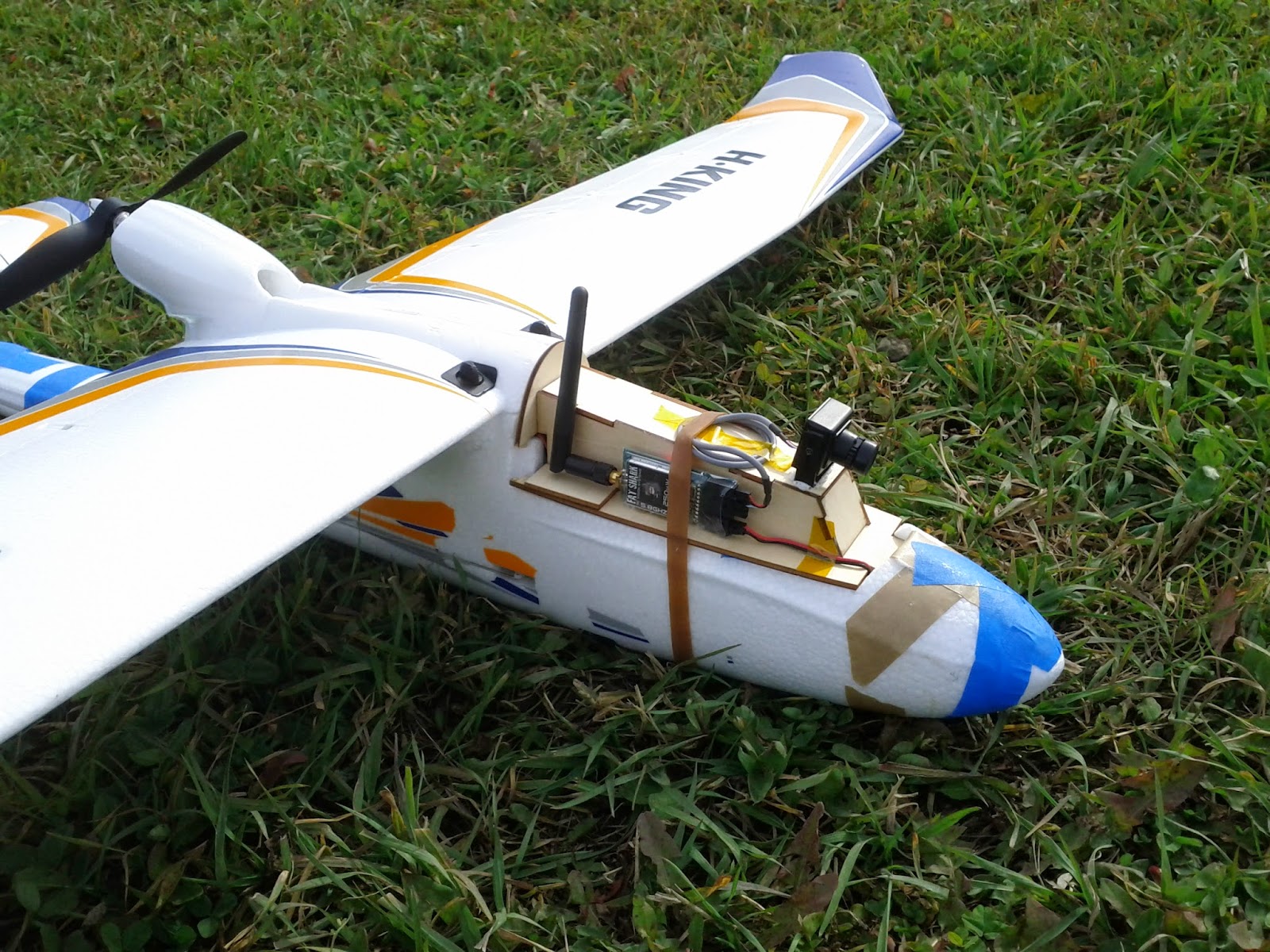 I decided to get into RC aircraft with FPV (first person view) and did it the hard way by learning it all myself.  This is the guide I wished I had when I had started.

I was never interested in RC flying because as far as I was concerned, the plane is the one having all the fun.  FPV changes that by putting a little camera on the plane and letting you fly from the plane's point of view.  Now I can be the one having the fun, and so can you! 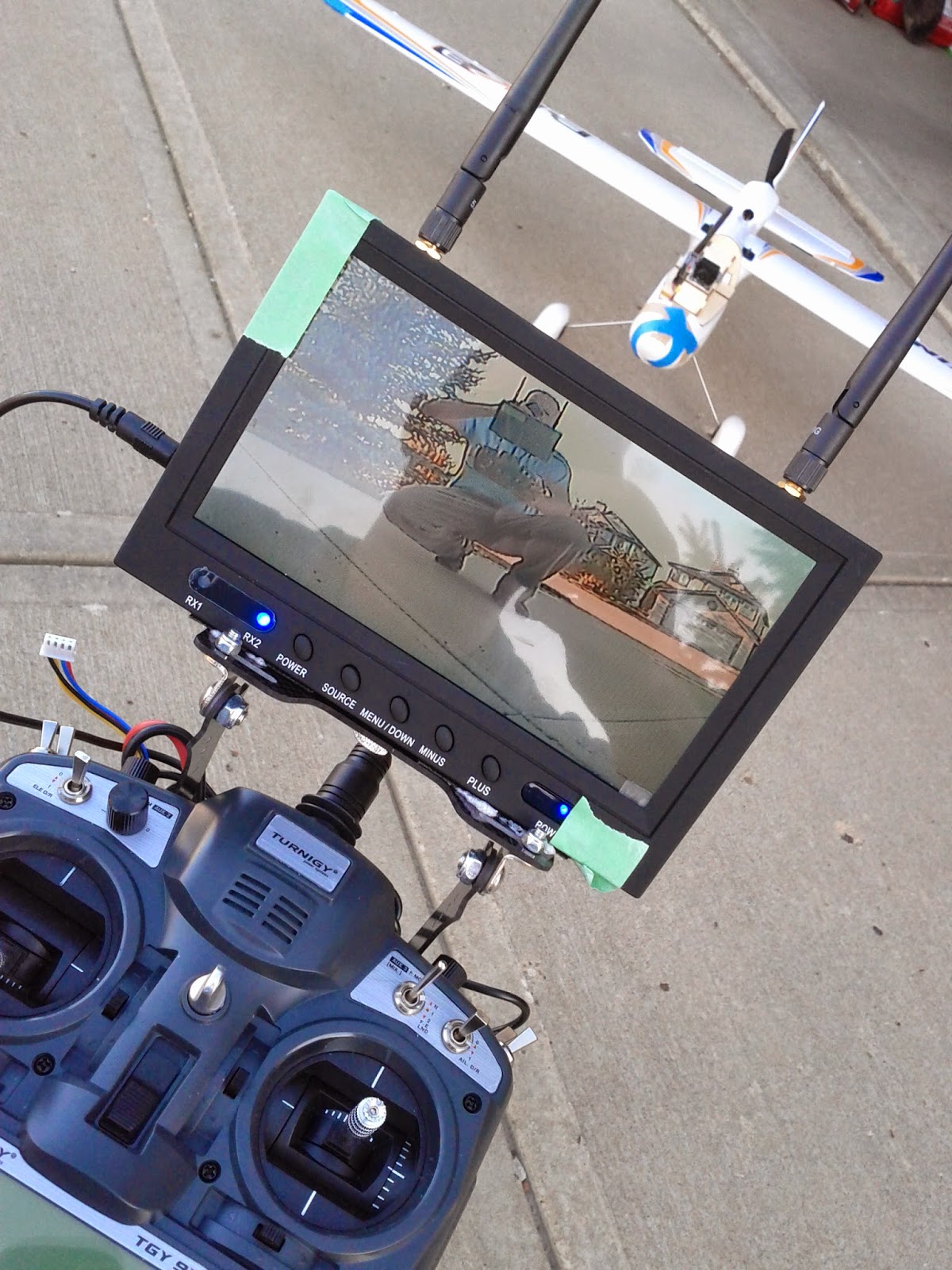 
I wanted to teach myself flying and FPV.  Before I began, I carefully considered all the factors involved and judged whether what I was planning was reasonable and efficient, or just needlessly harder than it had to be and maybe a little reckless.  I did it anyway.

I had never flown RC aircraft before, but I have some small experience with RC cars from a long time ago.  Wading into modern RC was a strange mixture of things that are either totally different now (and is common knowledge taken for granted so no one explains any of it), or things that haven't changed at all in the past 25 years, so there was a learning curve and a "purchasing curve" where I bought a few things I didn't need, and had to buy some things I didn't realize I was missing.  I also went through a whole plane before actually getting past the first few stumbling steps of Learning How To Fly From Scratch.  You can avoid some of this by learning from what I did.

If you're at all like me, then you can benefit from the lessons I banked.  Here is the guide I wished I had when I decided to dive into FPV RC flying.

You should be comfortable with basic electronics and be handy with mechanical things and tools.  If not, you will face challenges trying to do this stuff.  There is very limited "plug and play" involved in this hobby, especially with FPV.  But it can be very rewarding!

I hope you find this guide useful, but if you run into something that doesn't match your expectations don't look at me, I've never done this before.

However, if you're a reasonable person and new to all this like I was, you'll be perfectly open to learning about some of the pitfalls, even if you - also like me - prefer to learn things on your own.  Not all of it is intuitive.  The big one comes down to:


Losing your radio link or your video feed can easily lead to loss of control even if you're confident of your flying ability. Consider what could go wrong and plan accordingly.  If you can't control a thing, control where it happens.  Ideally do both.  Effective planning for failure is in layers and depth.  Intentions & Hopes are not plans.

When things go wrong in the air, they tend to go wrong very quickly.  Fun example: RC Crash Compilation on YouTube - watch how many look perfectly normal and stable before everything goes horribly wrong.

Planes are quite fast, probably faster than you realize if you are brand new to this.  Also they don't turn on a dime.  An empty lot that looks plenty big to you is probably quite cramped for a plane. 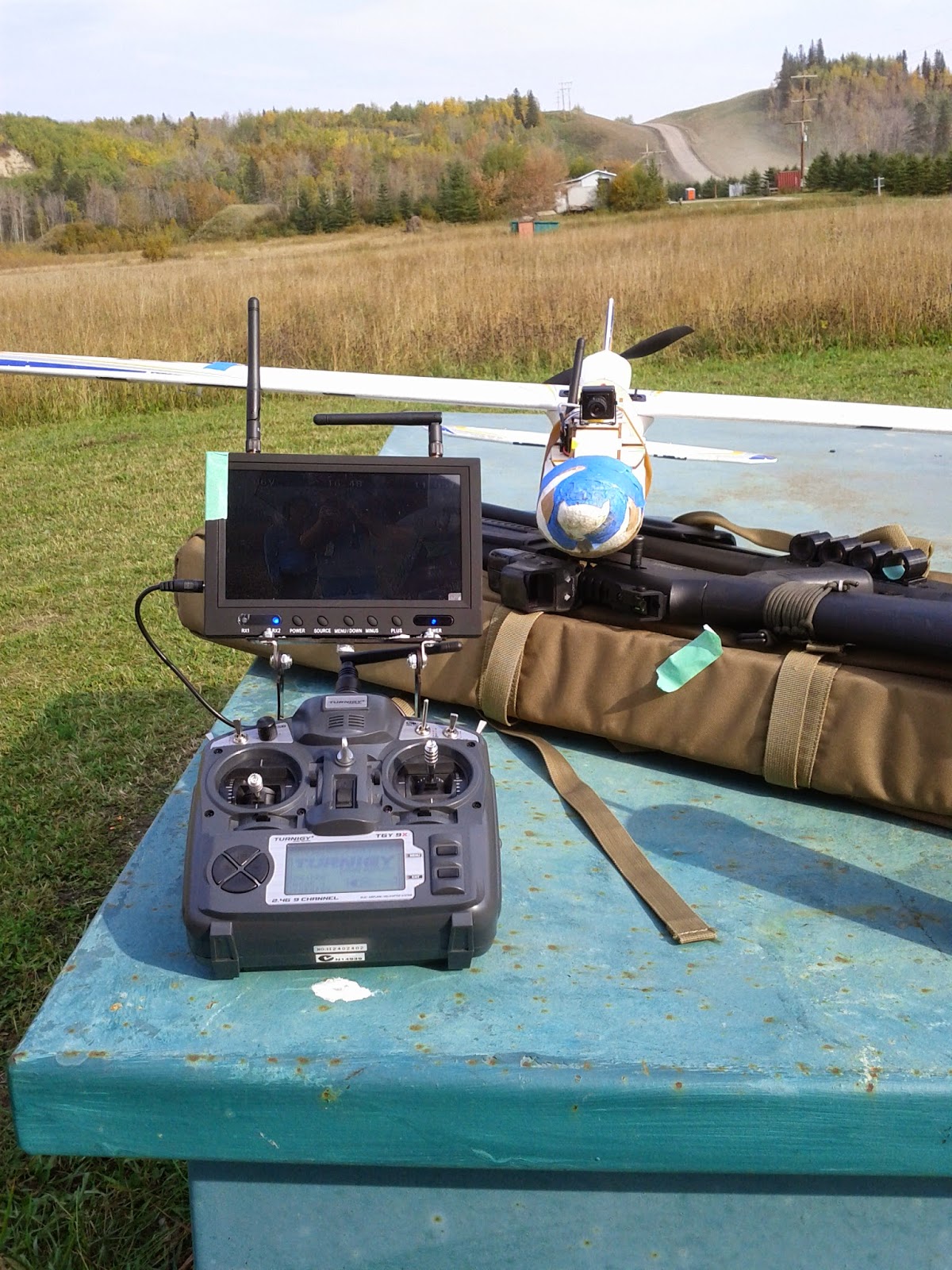 Brief Quick Things I Wish I Had Known Earlier 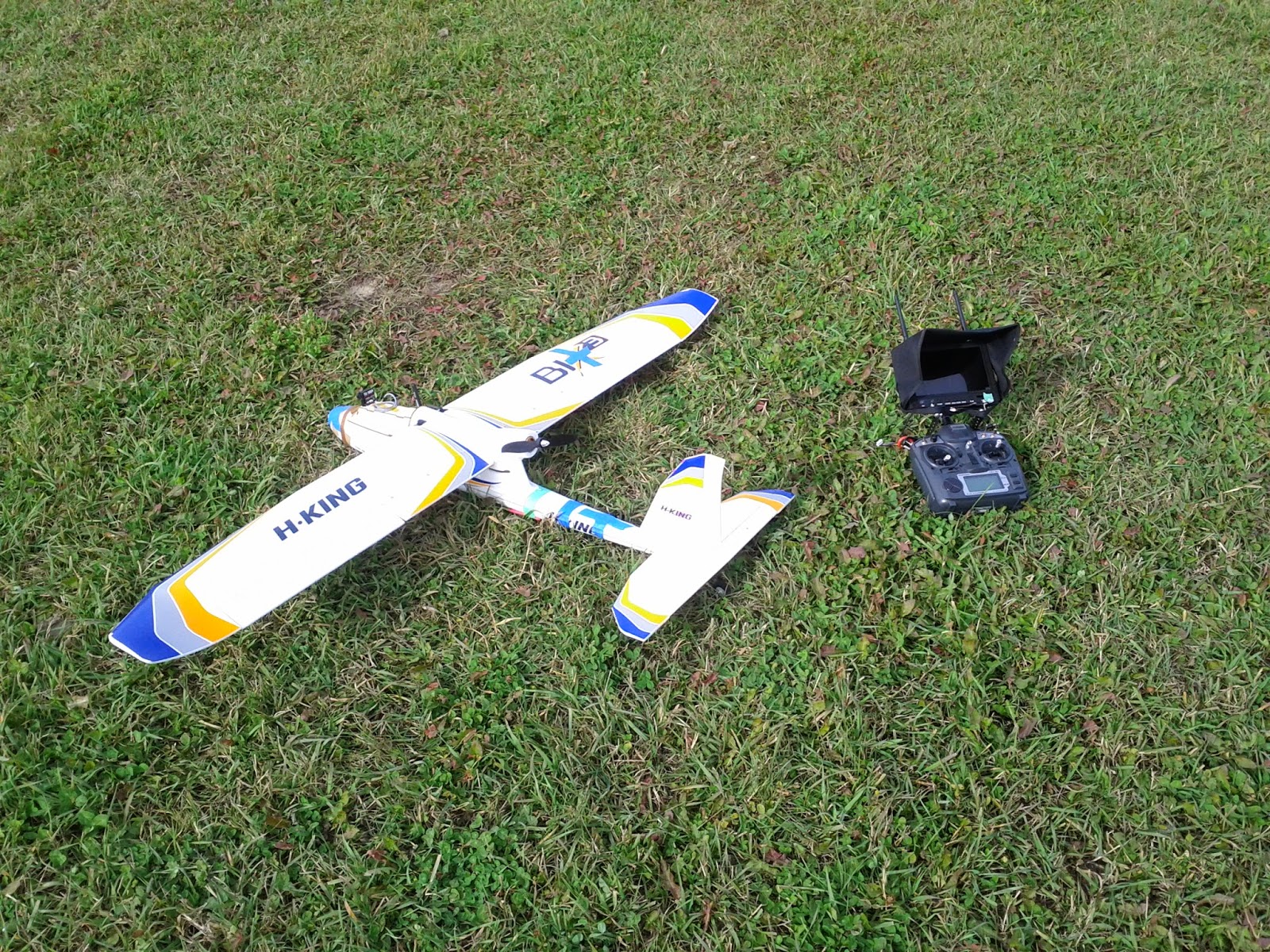 Overview of the Hardware


My whole flight setup consists of:


When I want to fly, I bring all that to an appropriate location and:


Here is the actual hardware I use in flying.  I bought it all from HobbyKing. There is more than one approach, but this is what worked for me.  Here are links to parts, along with my comments.


You will need to do some minor soldering here and there to make some connections work.

A Brief Word on Antennas (updated 2014-10-16)
I write this now that the snow is down and I have had a fair bit of experience with my setup.  The "rubber duck" (linear polarized) antennas that come by default on the video equipment always worked fine for me.  I upgraded to Circular Polarized (CP) antennas to try them out, but found that range was not actually any better for me.  I fly exclusively in wide open areas.  I experienced a better signal when I was directly overhead (linear antennas would scramble a bit in this position) but no other improvement I could detect.  Every product page will tell you you need the CP antennas for best range and performance, but my advice is not to sweat the antennas on the video equipment.  Experiment later, sure.  But the rubber duck stick antennas will be fine.

Regarding the FPV equipment
The weight and size of the units I listed will fit nicely onto the Bix3's wooden FPV platform that replaces the cockpit.  This, and using a separate battery for the camera and transmitter makes the FPV equipment self-contained in the platform, so in the event of a crash it will simply pop off and will not "yank" anything inside the plane along with it.

There are other and cheaper FPV hardware setups available, but this is the one I used.

The following configuration will make your model fly what I'll call "videogame style" where left is left and right is right, but down is up and up is down.  The nearest top-right 2 position switch (marked GEAR) will control whether the stabilizer unit is in 2D mode (switch away from you) or OFF (switch towards you). 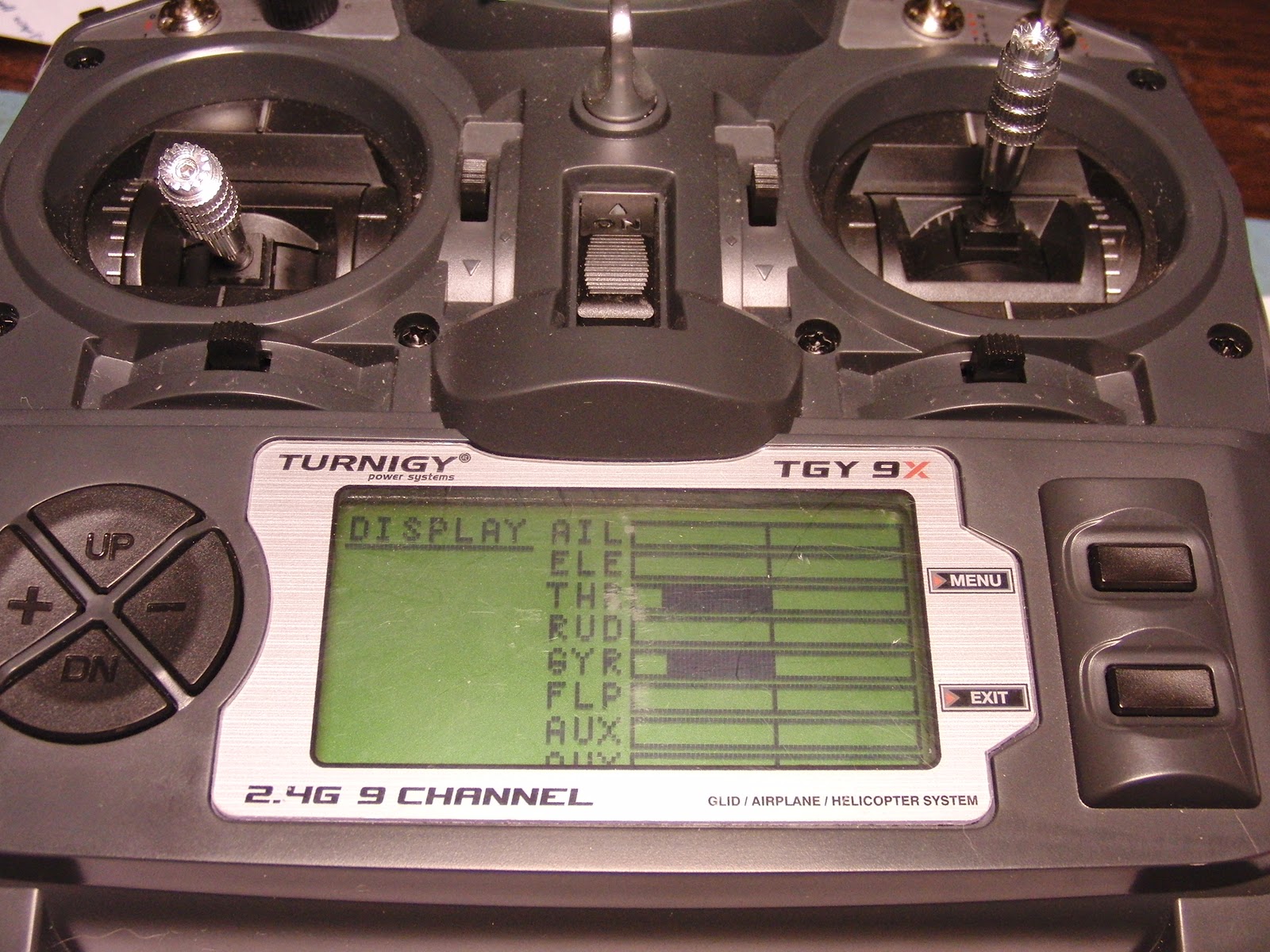 Idle
(Throttle down, and stabilizer on: top right 2-position switch away from you) 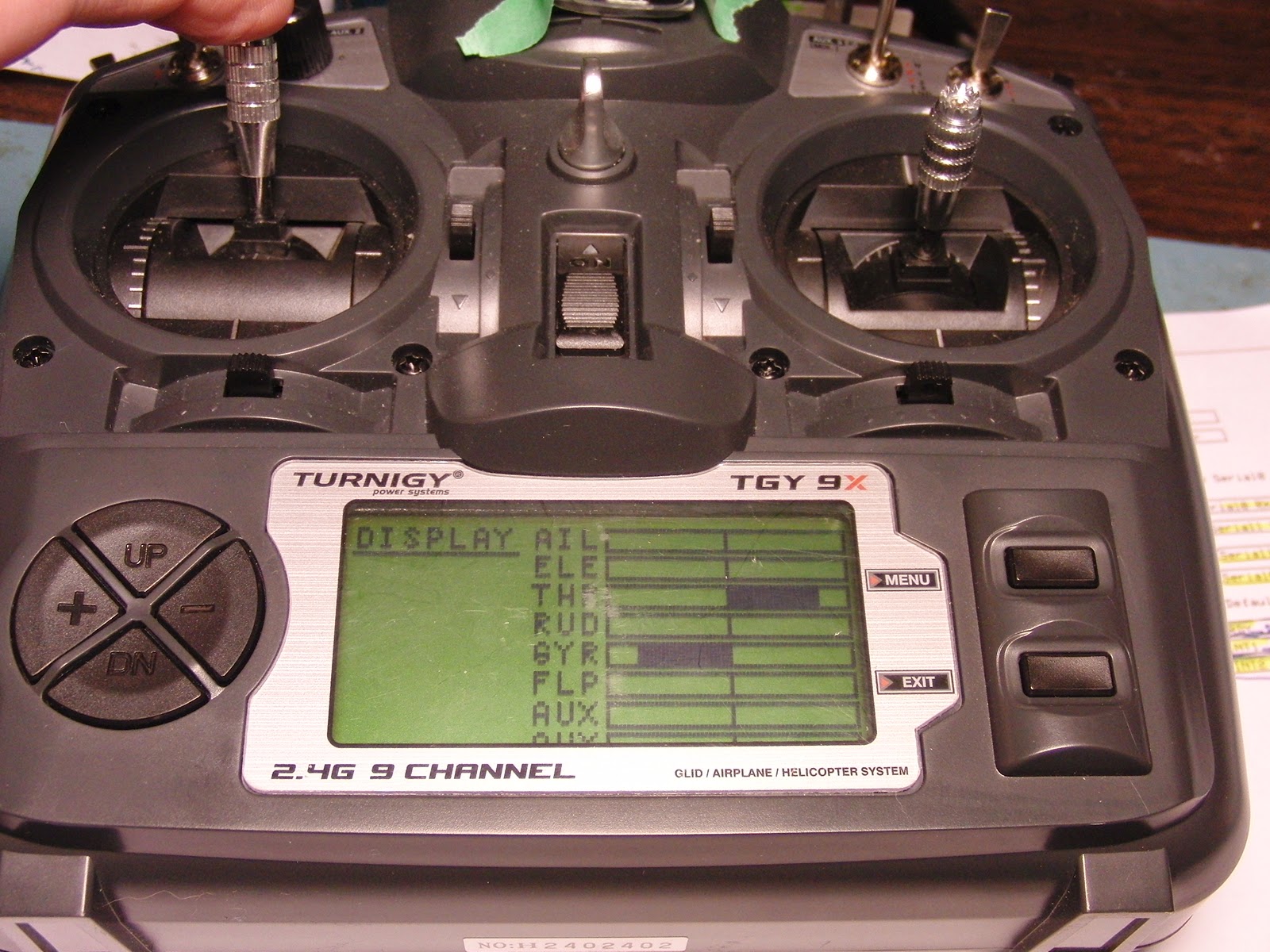 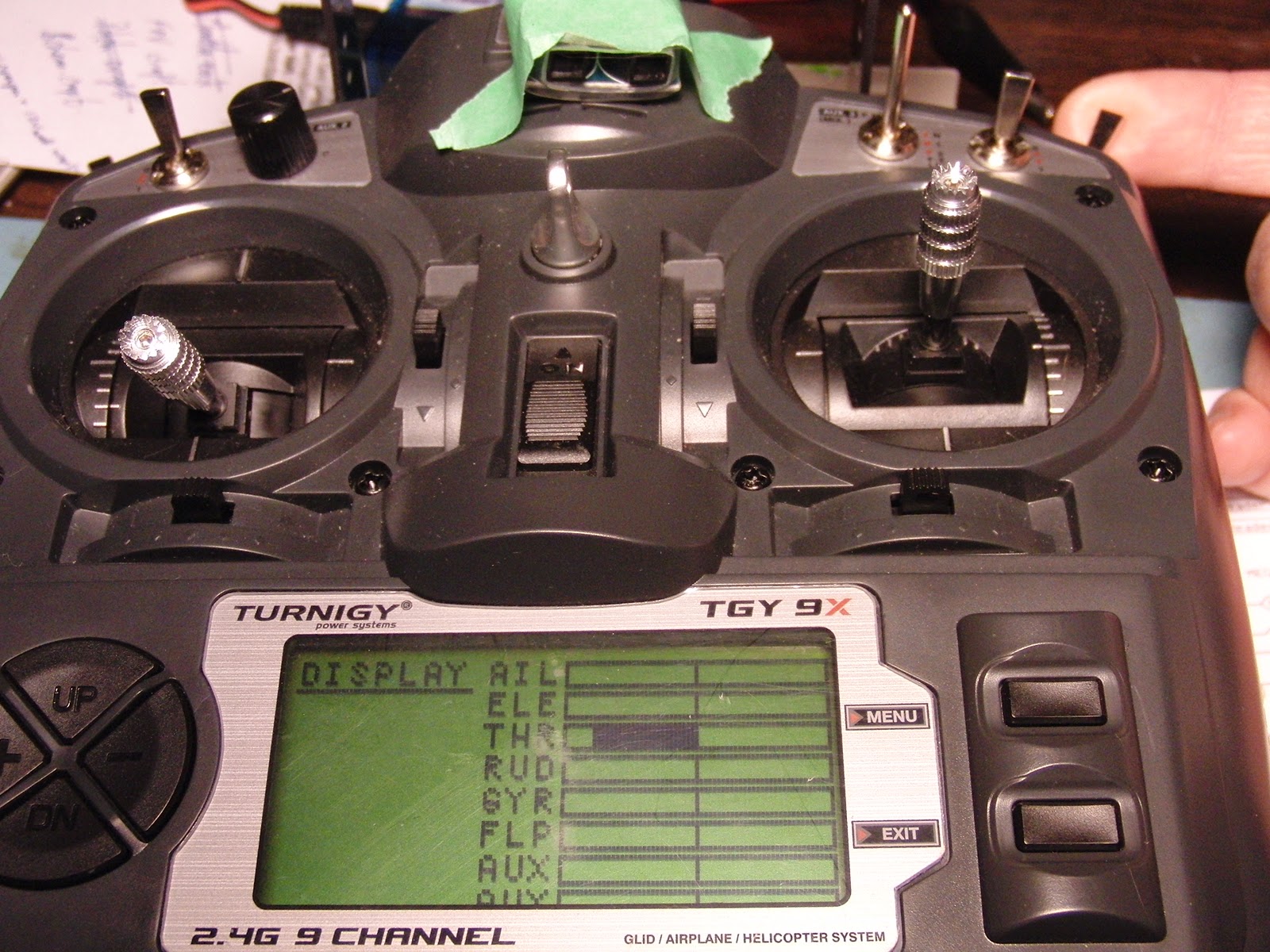 Stabilizer off (2-position switch towards you) 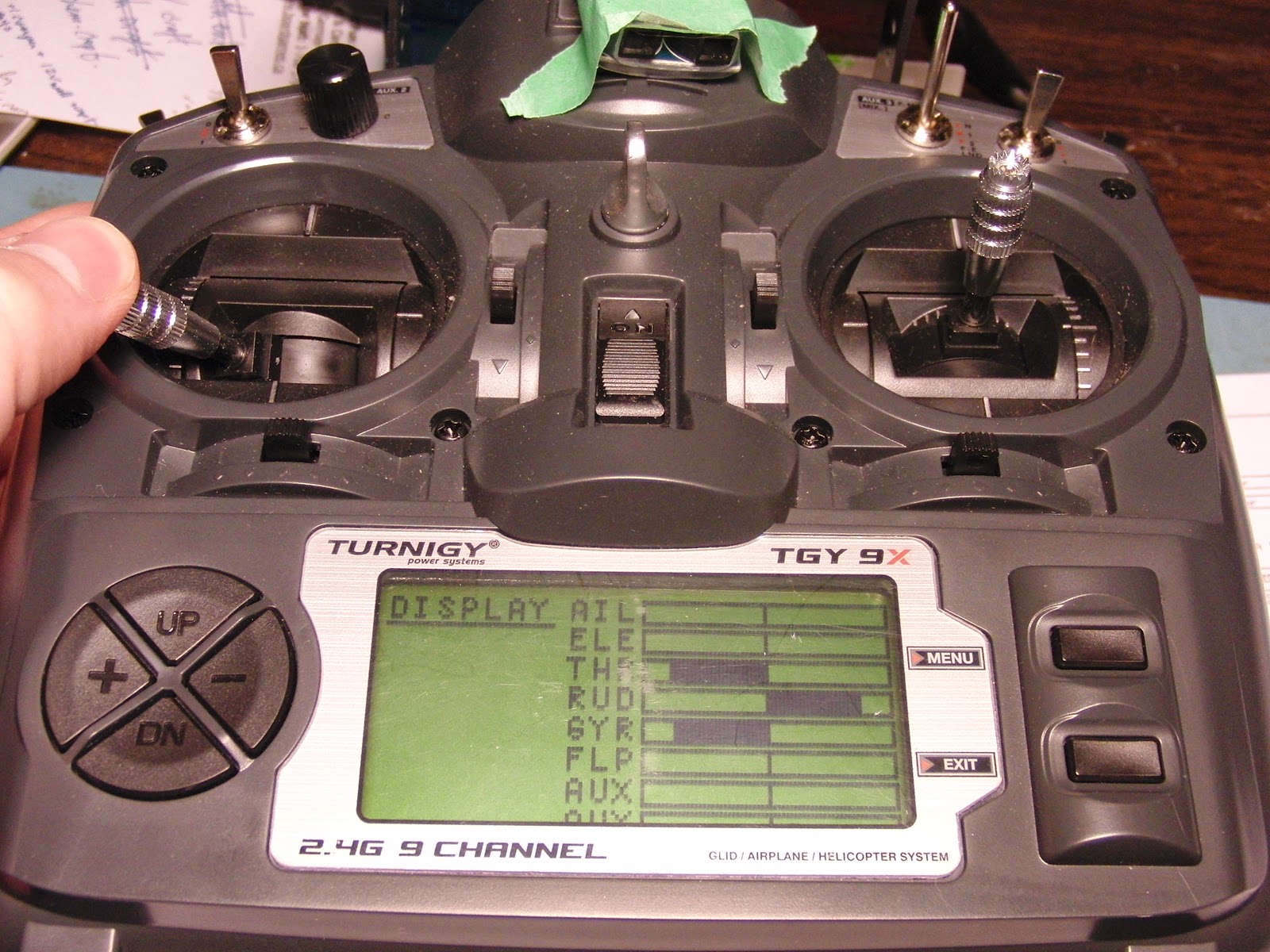 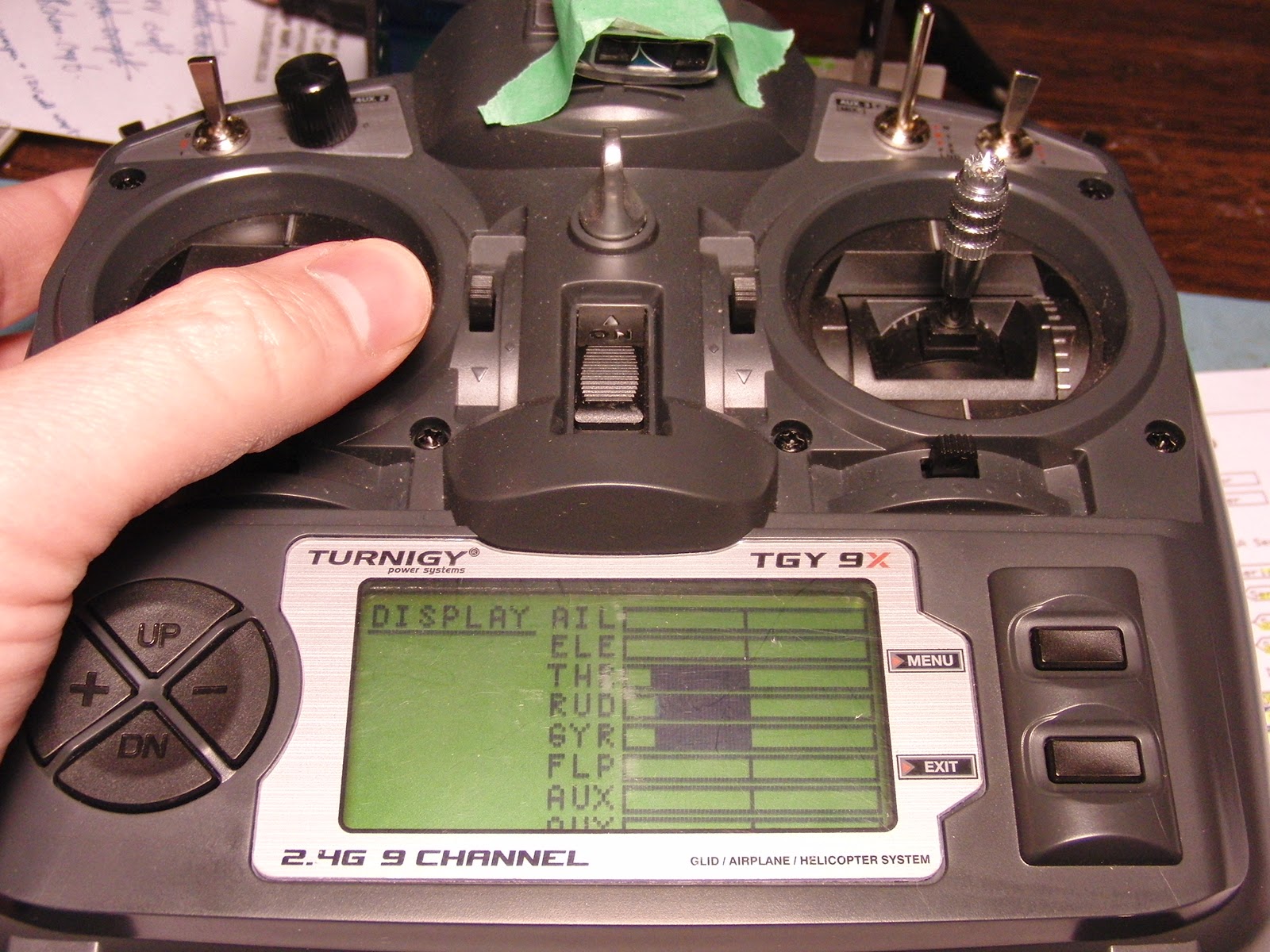 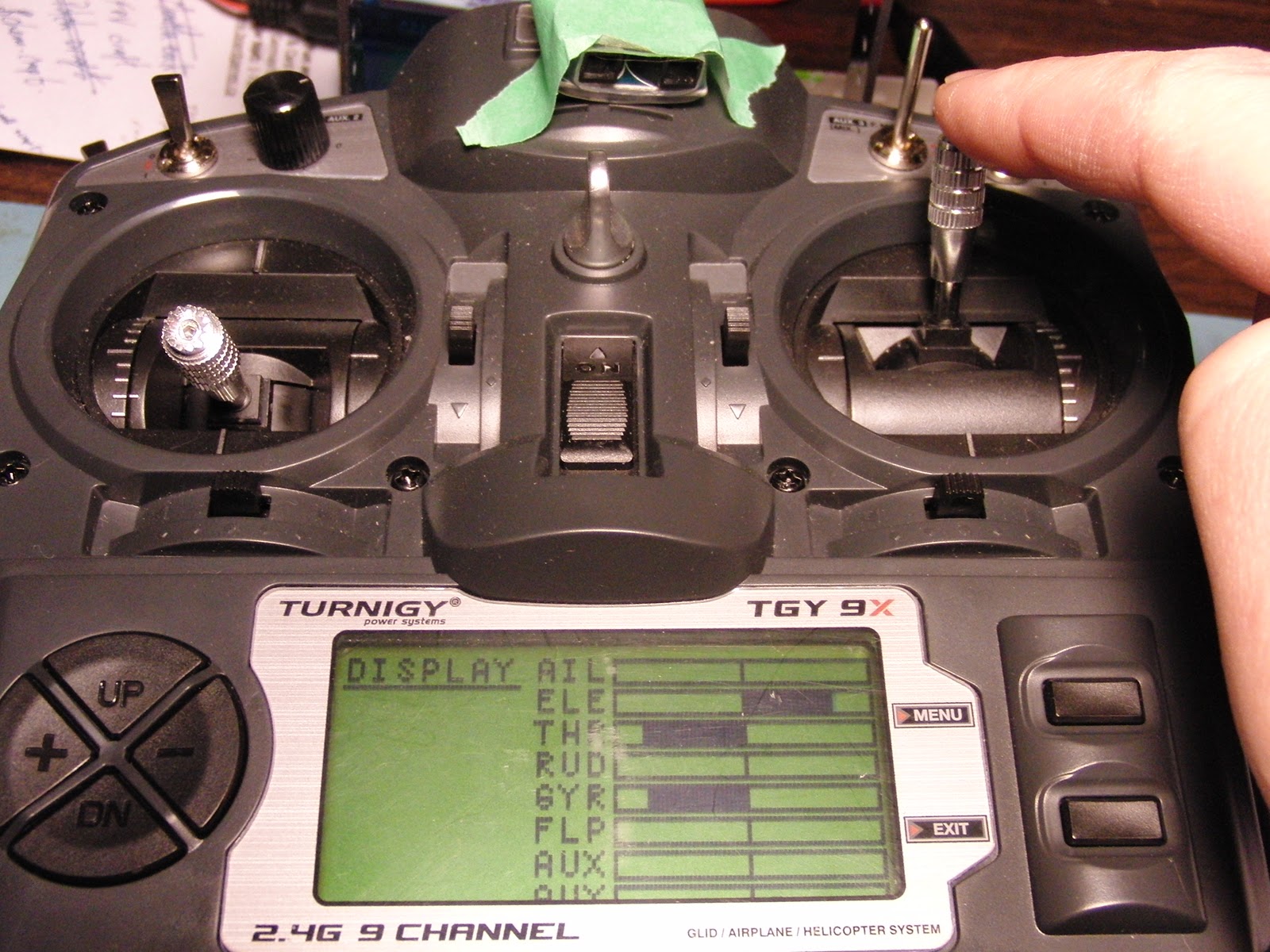 Elevator down (stick up, dive) 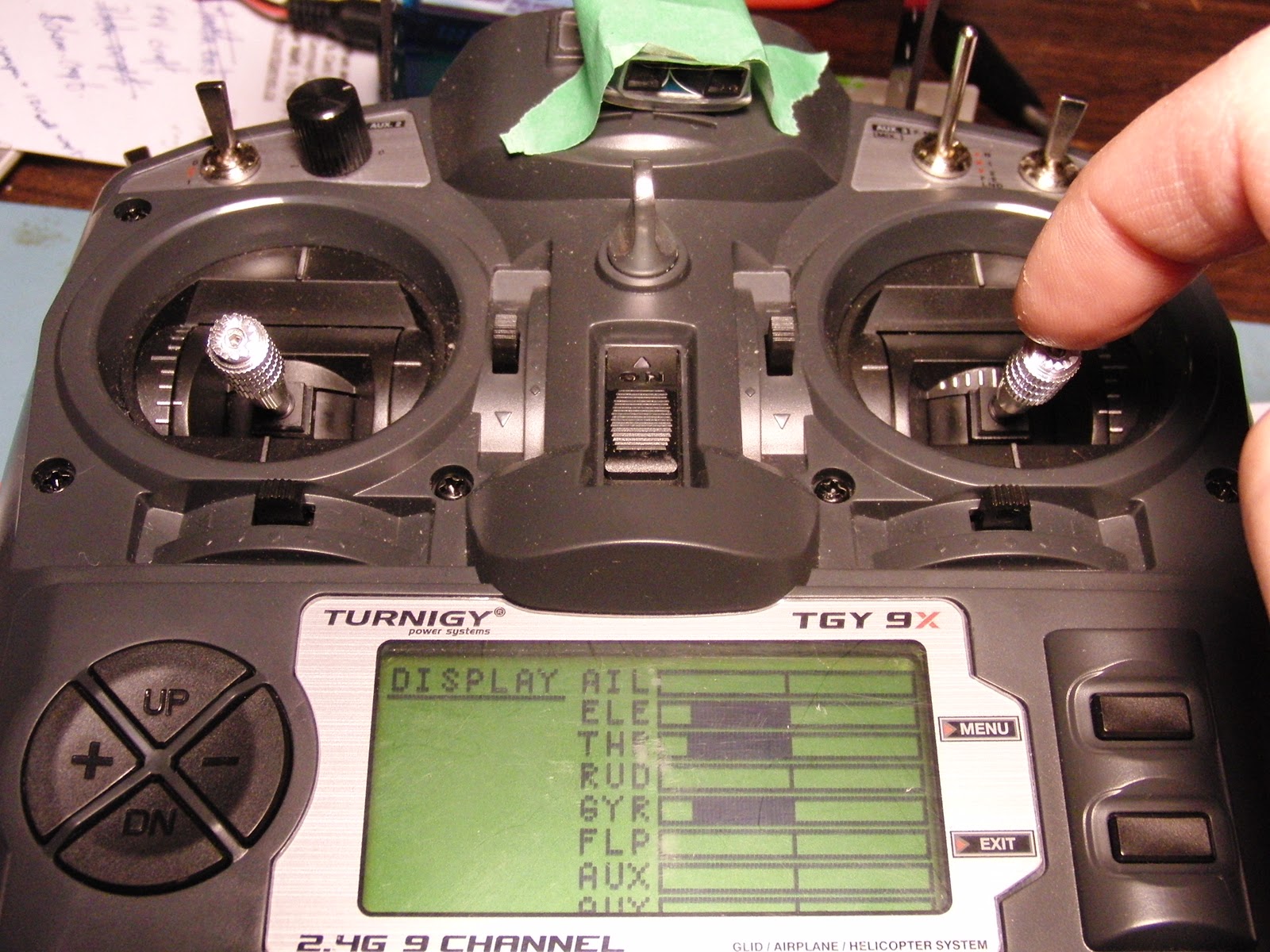 Elevator up (stick down, climb) 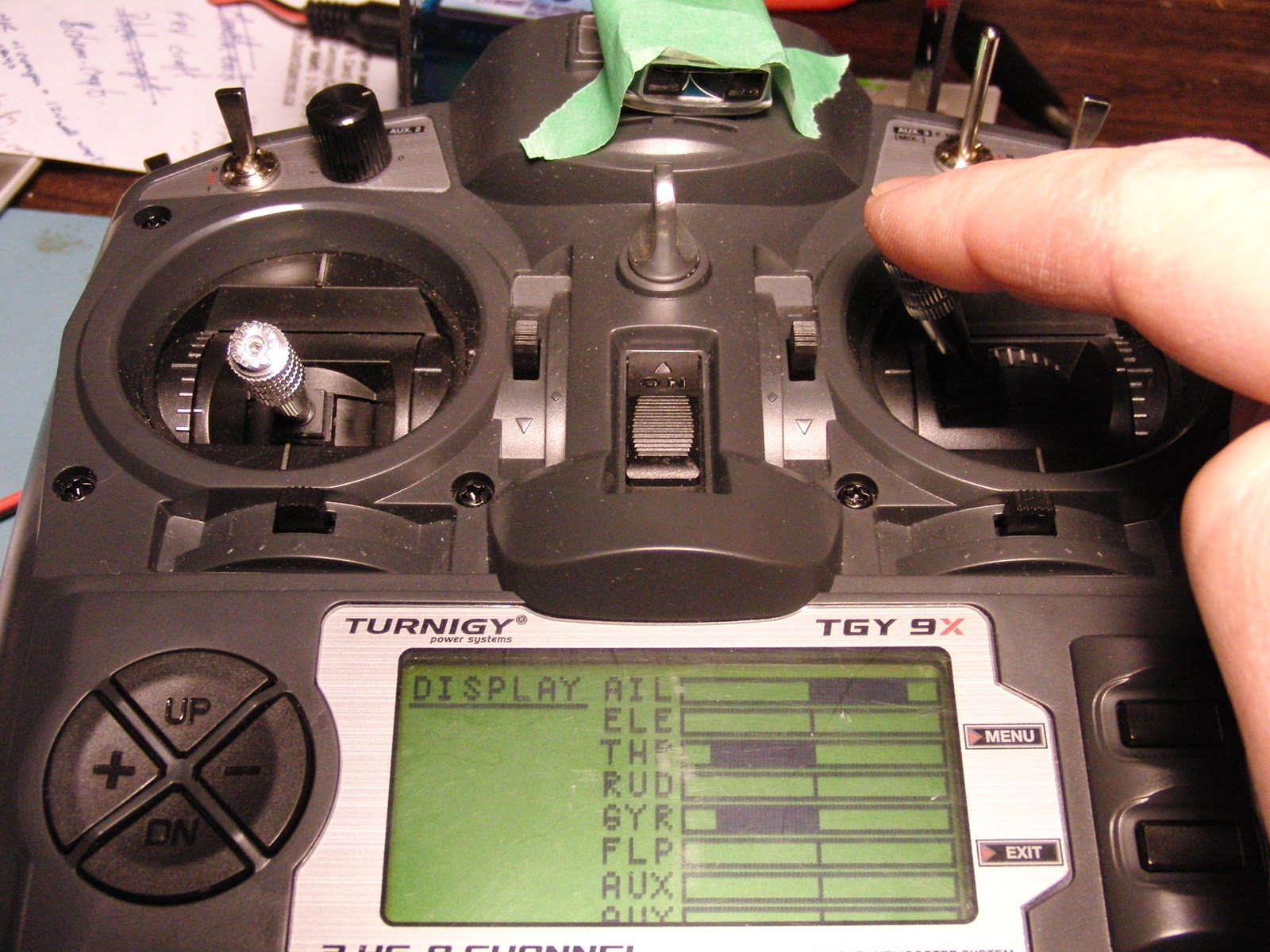 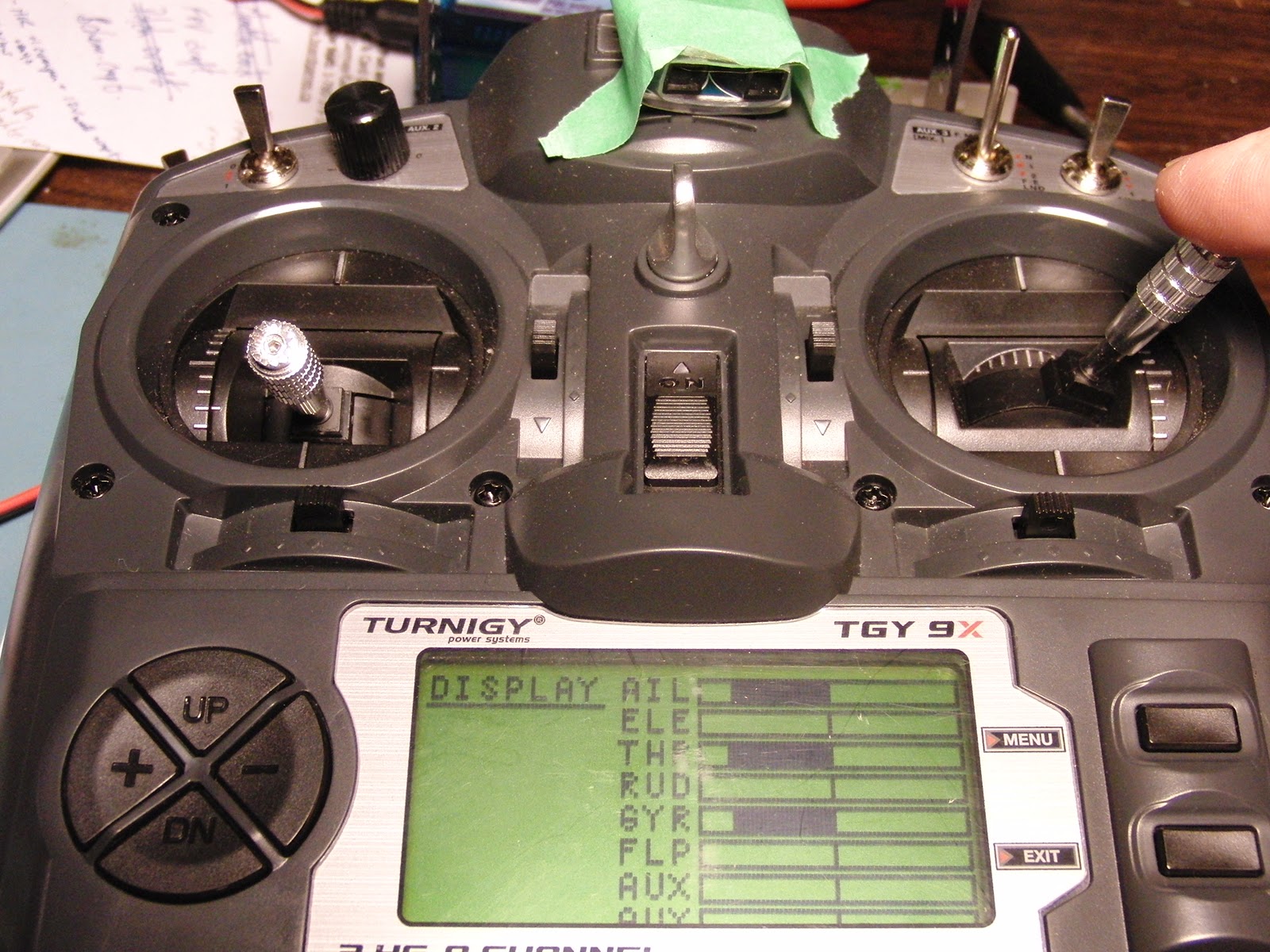 Do a final function check

Before the stabilizer can be used, we need to do a configuration to tell it what "level" is.  (In the manual this is referred to as "Reset Level Flight and Trims".)  The transmitter needs to send a special signal to trigger this configuration, so we need to make a slight change then put things back to the way they were.


Note: If you leave the MOD input of the stabilizer (for Mode: 2D, 3D, or Off) unconnected, the stabilizer will default to 2D mode on.  You can then free up channel 5 for something else if you wish, if you don't mind that you'll be unable to disable the stabilizer as a result.

Now that everything is built and working properly, here are some tips for your first flight.


You're sort of going to be on your own for launching, flying, and landing but here are some tips.


My biggest problem - which led to a whole plane being repeatedly broken and repaired until it died without ever properly flying - was being too timid with the takeoffs.  You can't slowly ease into it.  I eventually learned to launch at full throttle and don't wimp out until you're up in the sky.  Don't back off the throttle until you're flying straight and level.


For landing, you can get low and straight and cut the throttle - you'll glide with this model for a while.  It's easiest to belly-land on grass, and it's easier to land by watching the plane instead of the camera feed. 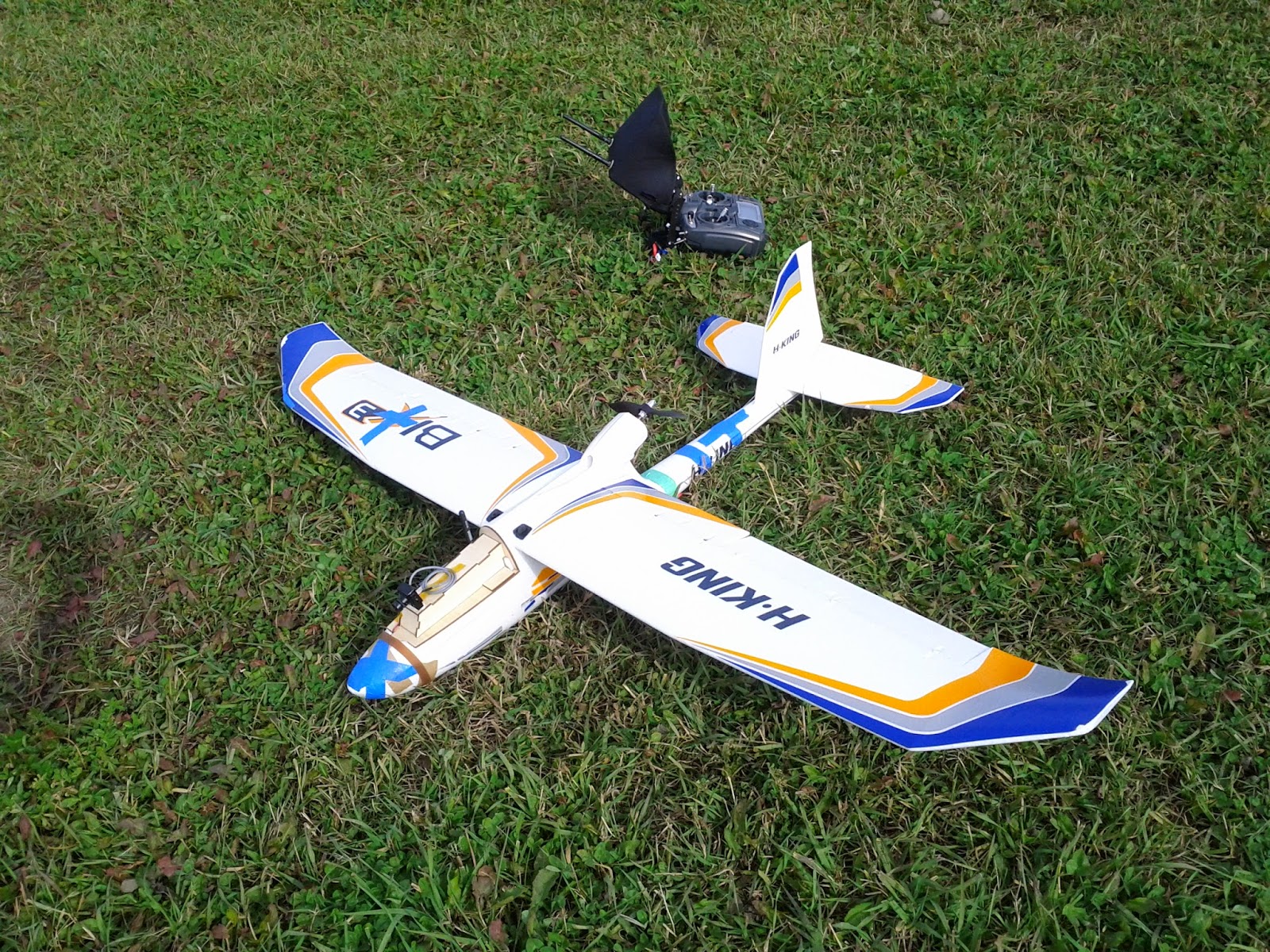 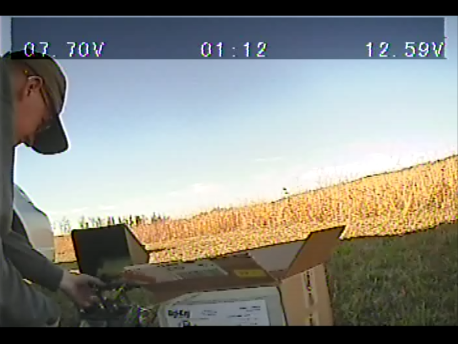 Of course, what I really want is a Phantom 3 from DJI.


If you successfully fly, you'll soon find that you might want more.  Such as the ability to record your FPV video for later viewing and analysis.  Or adding a data readout to your video feed to see battery power.  Here is a sampling of additional or alternate parts I have experimented with or plan to experiment with: 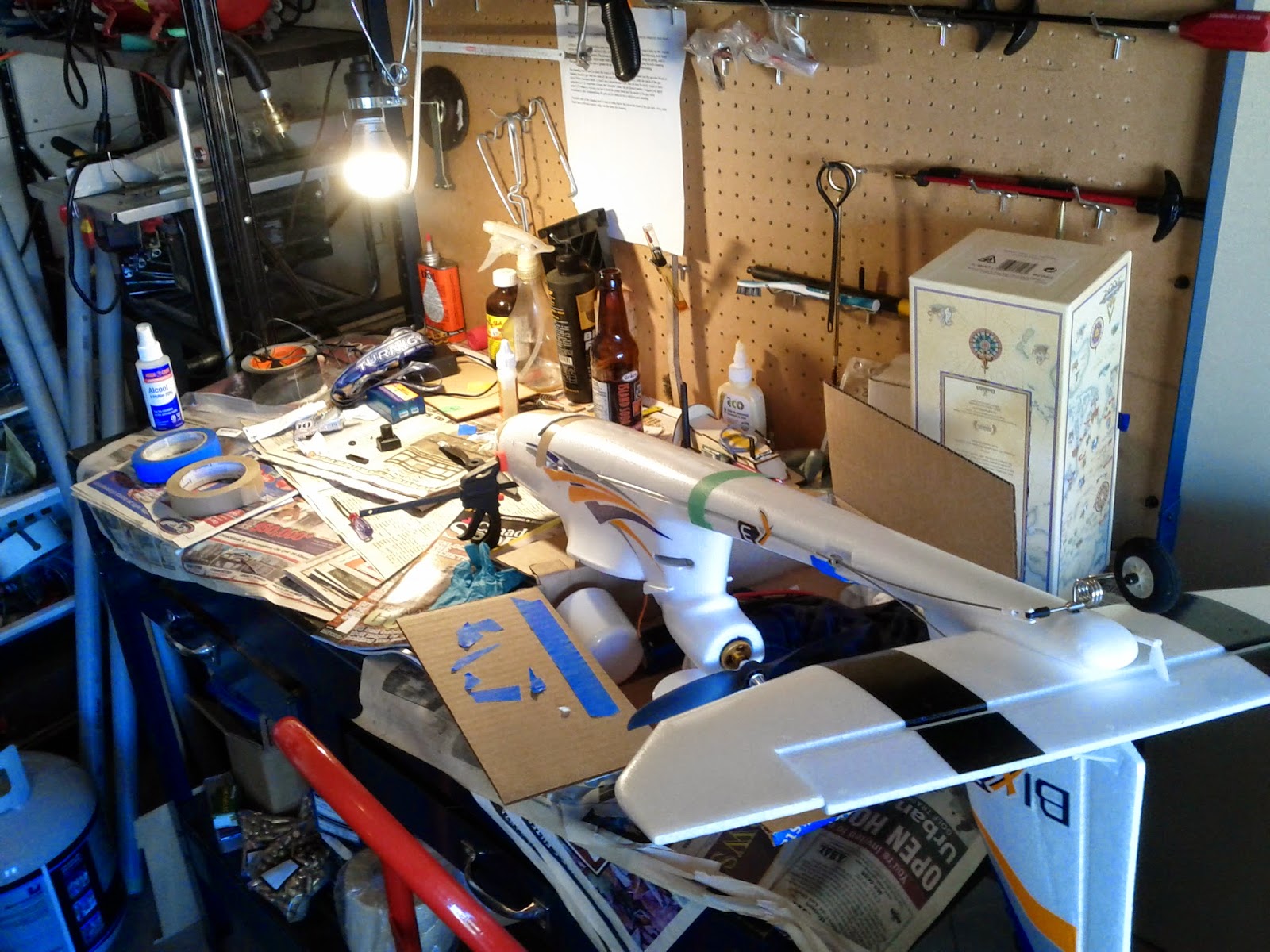 Email ThisBlogThis!Share to TwitterShare to FacebookShare to Pinterest
Labels: experimental, fpv, how to, new toys